Apple has launched new, special edition versions of its iPhone 8 and iPhone 8 Plus sporting a red chassis. 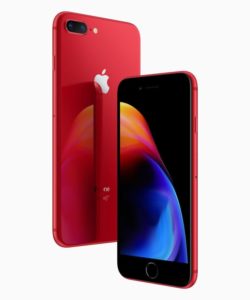 Dubbed the “(PRODUCT)RED” edition, the devices are identical in function to the iPhone 8 devices launched last autumn. But the special red iPhones serve a charitable function, with Apple announcing in a press release that an unspecified portion of all sales will “go directly to Global Fund HIV/AIDS grants that provide testing, counseling, treatment and prevention programs with a specific focus on eliminating transmission of the virus from mothers to their babies.” It’s the product of a partnership with (RED), a charitable organization founded by Bono and Bobby Shriver in 2006.

As for the devices’ specs, their lack of differentiation from the original iPhone 8 models is important in that it somewhat undercuts previous speculation that all of this year’s iPhones would move away from fingerprint sensors in favor of the Face ID facial recognition technology featured in the iPhone X. Of course, given that it’s only April, there’s still a very strong possibility that Apple will go ahead with its biometric shift to facial recognition for its next-generation iPhone devices anticipated for this autumn.

Meanwhile, looking much further ahead, there’s a new rumor from Taiwan’s Economic Daily News that Apple is considering the implementation of a three-camera system for its flagship 2019 iPhone, along the lines of Huawei’s new P20 smartphones. While we’re wildly speculating about the iPhone XII, we might as well also note that the new Porsche Design Huawei Mate RS features an in-display fingerprint sensor, a feature that Apple could emulate while maintaining a focus on Face ID. But at this point there doesn’t seem to be any good reason to think Apple is considering such a feature, or to think that it’s even actively working on next year’s iPhone, since it’s still expected to launch at least one new device this autumn.

As for the new red iPhones, they’ll hit stores this Friday.

Let Your Biometrics Grant You Access at Mobile World Congress