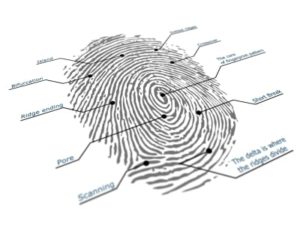 Fingerprints are practically synonymous with identity. The unique ridges and whorls on the tips of your finger have been distinguishing one person from another since 1788, when German anatomist Johann Christoph Andreas Mayer discovered that every fingerprint is different.

Fingerprint readers do exactly what their name describes. Using optical, capacitive, or ultrasound sensor technology, they measure the characteristics of a fingerprint. This can be used to identify an individual by comparing the scanned print to many different templates stored in a database, as is commonly done with criminal background checks, or it can be done on a one-to-one basis in order to authenticate a user.

Thanks to the widespread availability of consumer grade fingerprint sensors on smartphones, the average user is becoming familiar with the modality as it continues to proliferate digital security and identity across all manner of vertical markets. Wall mounted access control terminals, police squad cars, patient sign-in areas at clinics—these are all areas where biometric fingerprint readers have been deployed.

The automotive industry, too, is increasingly turning to biometrics to address security concerns, and solutions designed to bring fingerprint security to connected cars have begun to emerge. In some countries it has become mandatory to enroll a fingerprint in order to open a cellphone account; other places require fingerprints to vote in elections. And soon, fingerprints are set to replace credit card PINs as biometrics sensors are integrated into smart cards.

Fingerprint readers are all around us, ushering us into a new era of identity.

Aware, Inc., a leading provider of biometric software and solutions, details the many ways that biometrics can be used to enhance driver safety and the user experience behind the wheel.

This white paper from secure identity solutions provider HID Global illustrates how biometric technology can be used to establish irrefutable identity and maintain trust. The paper explains the advantages of identity solutions based on “who you are, not what you know,” and makes a strong case not only for HID Global’s solutions, but for biometric authentication more broadly.

Fingerprint biometrics specialist BIO-key makes the case for biometric multi-factor authentication. The report features excerpts from a Private Industry Report from the FBI alongside alarming figures illustrating the danger of data breaches, and explains how biometric MFA security can counter such threats.

Read on to meet the leading providers of Fingerprint Biometrics solutions.

IDEMIA is the global leader in Augmented Identity for an increasingly digital world, with the ambition to empower citizens and consumers alike to interact, pay, connect, travel and vote in ways that are now possible in a connected environment. Securing our identity has become mission critical in the world we live in today. By standing for Augmented Identity, we reinvent the way we think, produce, use and protect this asset, whether for individuals or for objects. We ensure privacy and trust as well as guarantee secure, authenticated and verifiable transactions for international clients from Financial, Telecom, Identity, Public Security and IoT sectors.